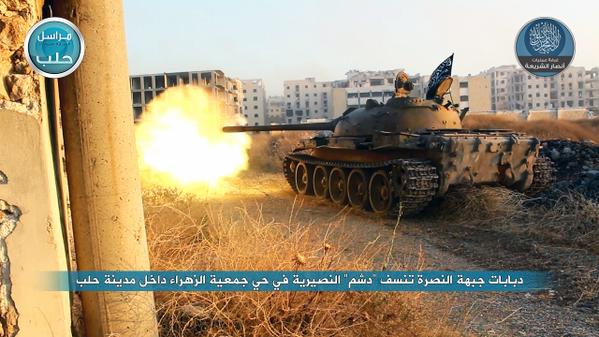 Recent successes by opposition armed forces in Idlib province in northern Syria have once again thrown the role of the al Qaeda affiliate Jabhat al-Nusra (JN) into sharp relief. As one of the most powerful armed actors operating in northern Syria, it is suspected of being a key player in joint Saudi, Qatari and Turkish plans to oust President Assad. However, the potential creation of an al-Qaeda governed mini-state in northern Syria, alarms the US and other western governments, prompting Coalition airstrikes against key JN targets. The three governments have therefore come under severe political pressure over their alleged support for JN. They have responded with a campaign to try and re-brand JN, in order to make it a more acceptable partner.

On the ground, they have tried to encourage JN to adopt a more moderate approach. It is certainly noticeable that JN has to a large extent avoided the excessive and arbitrary violence that characterises IS rule in north east Syria and Iraq, and has also worked co-operatively with other armed factions. However, it has not abandoned its hardline ideology. This has been evident in the way it has forced the Druze community in northern Idlib to renounce its faith, as well as its execution of a woman in Idlib province for adultery, and the arbitrary murder of a number of Christian and Druze civilians and the seizure of their property.

Whilst the three governments could do little to modify JN’s ideologically driven actions, they recognised that the immediate problem with JN’s image was its affiliation with al Qaeda and global jihad. Other jihadi groups operating in Syria which have similar ideologies but strictly national objectives, such as Ahrar al-Sham, have not caused so much anxiety in the West.

In early March 2015, regional media outlets began reporting that the Qatari government was trying to persuade JN to renounce its ties with al Qaeda and become a national organisation in return for greater levels of support. Re-branding JN as a national organisation would confer legitimacy on it, because its ideology could be portrayed as being rooted in the Syrian revolution itself, rather than being something imported by outside parties. This sparked an outburst of frenzied speculation in the mainstream media and on social media platforms, which only came to an abrupt end when JN publicly announced that it would remain affiliated to al Qaeda.

This failure led Qatar to pursue a more subtle media campaign which glossed over JN’s affiliation to al Qaeda, and defined it as a moderate organisation. This was evident in the Qatari owned Daily Star in Lebanon, which in one article stated that JN “applies a hard religious jurisprudence, but unlike ISIS does not repress people or force non-Muslims to flee.” The failure of the article to reflect on its links with al Qaeda, the favourable comparison with IS, and the acknowledgement that it is rooted in Islamic jurisprudence, all served to promote the image of JN as a mainstream jihadi organisation.

At the same time, Qatar has continued its efforts to present JN as a Syrian national organisation. In May 2015, al Jazeera interviewed the JN leader Abu Muhammad al Jolani. During the interview, Jolani re-iterated that JN was part of al Qaeda, but claimed that it was a predominantly Syrian organisation comprising 70% Syrians, whose immediate goal was the establishment of an Islamic government in Syria based on sharia law. For many devout Muslims, that is both a reasonable and a moderate message, especially when compared to the abuses of the secular Assad regime.

However, al Jazeera was widely condemned within Syria for allowing JN to use the interview as a vehicle to portray itself as a moderate organisation. The interviewer who had a reputation as a tough questioner, was widely criticised for having given Jolani an easy time. A few days after it was broadcast, the prominent Syrian opposition online newspaper Zaman al Wasl described the interview as “a disappointment for some supporters, rivals and even sympathizers”.

The fall-out from the interview demonstrated that JN’s affiliation to al Qaeda continued to be one of the key stumbling blocks to re-branding JN. After their earlier, direct approach failed, Turkey and Qatar have been trying to use the Muslim Brotherhood in Syria to encourage JN to distance itself from ‘global jihad’ and al Qaeda. But it does not seem that the Brotherhood has sufficient leverage with JN. But despite the ideological similarities between the two organisations, this approach has also failed because JN perceives the Brotherhood to have deviated from the sharia because it participates in democratic processes in countries in which it operates.

In the absence of any meaningful change within JN itself, the Turkish and Qatari governments have persisted with their efforts to re-brand JN through continuing media messaging. In early July, the Turkish newspaper Daily Sabah described JN as being a group that “presents itself” as being affiliated with al-Qaeda, that is comprised of Syrian people and aims to establish a government governed by strict religious jurisprudence. This continued representation of JN as both a national and a theological organisation serves to build its legitimacy and may well resonate in some quarters in the Middle East. Certainly in Turkey, where the public debate is dominated by the perceived threat posed to Turkey by the Kurdish Peoples Protection Units (YPG), there is a lack of challenge to that characterization.

These efforts to re-brand JN through the regional media are on-going, but to succeed, it needs JN to make the symbolic break from al Qaeda, and also to moderate the most extreme of its actions. At the moment, there is no sign of either.