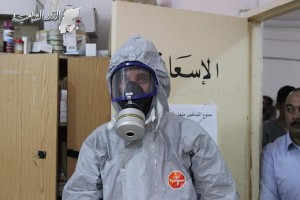 Through August and September there have been a number of reports that Islamic State (IS) had used Mustard Gas in Iraq and Syria. This follows multiple reports over the course of the year that it has been using Chlorine as a weapon. The US Administration has now stated that it believes that IS has successfully managed to develop Mustard gas. If that assessment is true, IS will be the first non-state actor to have ever developed this weapon.

This development is no necessarily that surprising. IS has repeatedly demonstrated its interest in using chemical weapons, and Mustard Gas is one of the easier chemical weapons to develop. Significantly, IS has also displayed growing evidence of its ability to innovate in weaponising chemical agents. It began with simple chlorine IEDs, but there have now been reports of it putting chemical payloads in mortar rounds, Katyusha or GRAD rockets, and heavy artillery shells. However, it is unclear whether it has yet mastered the fusing technology required to airburst these munitions, for maximum effectiveness.

This evidence suggests that IS is continuing to work on enhancing its chemical weapon capabilities. Evidence from insurgent activity in Iraq prior to 2010 suggests that its next step might be to develop the nerve agent Tabun, which is more lethal than Mustard Gas. To succeed however, it will need to acquire key precursor chemicals. We can also assume that the US is actively trying to identify and destroy IS’s chemical weapon infrastructure, as well as those working in it.